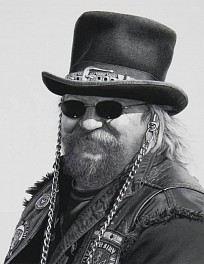 Bill Harrison received a Bachelor of Fine Arts degree in Painting from the University of Illinois in 1977 and spent the next 20 years as an illustrator. Working almost exclusively in ‘stipple’, constructing nearly photo-realistic drawings of food, people and products using only little tiny black dots, most of the illustrations were for companies like McDonalds and Citibank, translating their color photographs into stipple drawings so they could be reproduced in newspapers. “If you think it's hard creating the texture of leather using as versatile an instrument as a pencil, try doing the skin of a roast turkey using only little dots” states the artist.

For many years, Harrison had a hugely successful career, with artists' reps in New York, Chicago, Los Angeles, Dallas, and Paris. Unfortunately, in the mid-1990's newspapers all over the country switched over to computerized scanning and printing techniques, the demand for stipple plummeted.  His career as an illustrator came to a sudden halt, like a concrete sidewalk at the end of a twelve-story fall. For a while he tried to reinvent himself artistically, looking for other markets and eventually trying other styles, but nothing worked. Gradually Bill moved away from art entirely.

A few years ago, he decided to do a portrait of his now-grown sons for his wife for Christmas. He had done one many years ago in pastel but this time he decided to work in charcoal pencil. That portrait led to several others, and he then discovered the work of an English portrait artist named Andrew Tift, who inspired him to switch from the traditional charcoal pencil on colored paper portraits, to these much more detailed drawings on high quality paper, like Tift was doing. They began corresponding, and Tift has been wonderfully encouraging.

Since then, Harrison has tackled a variety of subject matters, from bikers to mountain lions.  "I consider everything I draw to be a portrait," he says, "whether it's a human being or an animal, I want to freeze the subject in time, and bring it up close to the viewer.  I want people to stop and look at the detail, at what it is that makes this creature unique."

He generally doesn't include backgrounds in his work, or if he does, they're very simple.  "I don't want people to get distracted," he says.  "If I do a drawing of a hawk in flight, and I draw him flying over a meadow with a tree line in the background, all of a sudden you're relating him to that background, making up little stories about him in your head.  You think 'There's the meadow where he catches mice' and 'I bet he lives in that tallest tree back there.'"  "Instead," he says, "I want the viewer to focus on the hawk himself.  Notice how the feathers are so translucent you can see the pattern in one when it's behind another.  Notice how the markings continue across different kinds of feathers, and how amazing that is.  Really look."

Response to his work has been immediate and impressive.  Collectors have been "blown away" by his skill, and the incredible detail in his work.  "His drawing are really stunning," says one.  "They're mesmerizing.  They have a real power that's more than the sum of the details included.  I'm frozen in place and stare at it every time I walk by."