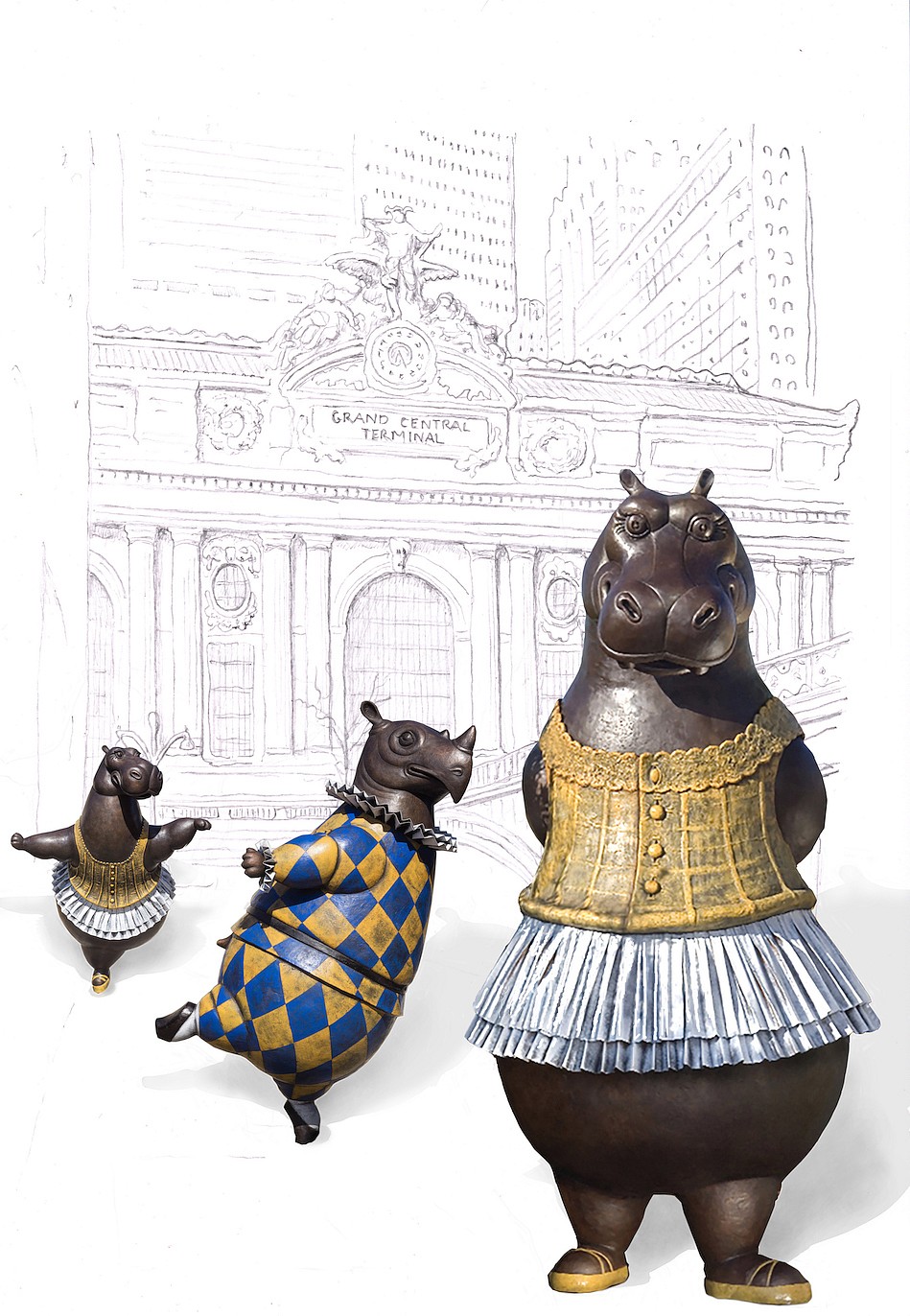 Cavalier Gallery is pleased to reveal the return of Hippo Ballerina. The iconic bronze sculpture is installed in New York City's Pershing Square Plaza West located on the west side of Park Avenue between East 41st and East 42nd Streets in Midtown Manhattan. Created by Danish artist Bjørn Okholm Skaarup, the monumental sculpture will be accompanied by Hippo Ballerina, pirouette and Rhino Harlequin, pirouette permitted as part of the New York City Department of Transportation's Art Program.

“My animal sculptures are a celebration of life and nature and its many intriguing shapes and creatures,” said artist Bjørn Skaarup. “Each animal is thoroughly culturalized; representing human allegories or use manmade tools, all placed in peculiar and surreal encounters between nature and culture. The result is a group of bronze sculptures that combines the gracious and exclusive with the communicative, distorted, and humorous.”

Known for creating a contemporary bestiary, or classical book of animals in bronze, each sculpture presents a whimsical story or allegory to decipher, with sources ranging from ancient fables and art history to music and modern animation. Rhino Harlequin, pirouette and Hippo Ballerina, pirouette both hail from Skaarup’s Commedia dell’arte series and are his unique take on the Colombina and Arlecchino (Harlequin) characters.

“Skaarup’s animal sculptures are stunning examples of his ability to masterfully rework classical and historical elements into his sculpture, said Ron Cavalier, President of Cavalier Galleries. “Just as Pershing Square Plaza represents the majesty of Grand Central as both an architectural and functional icon of the city, Skaarup’s unique sculptures add a magical element and will be wonderful companions to the thousands of passers-by who visit the plaza each day.”

“We are very excited that Pershing Square West Plaza will play host to Bjorn Skaarup’s sculptures from May until the winter holiday season,” said Fred Cerullo, the President and CEO of Grand Central Partnership, Inc. “These animated and entertaining sculptures will enliven the Plaza just as many more New Yorkers and visitors continue to return and visit the Grand Central neighborhood.”

From 1994-2004 Skaarup was an artist for the Danish National Museum and employed as a scientific artist at the Department of Forensic Medicine and Anthropology at the University of Copenhagen. In addition to his career as a self-taught sculptor, Okholm Skaarup is an accomplished author and illustrator of books on history, archaeology, and anatomy.

Recent solo exhibitions in the U.S. include a public installation of the monumental Hippo Ballerina in Dante Park at Lincoln Center, New York, NY; Carnival of the Animals at Cavalier Galleries in New York, NY, the Washington National Cathedral, DC, and at the Bruce Museum, Greenwich, CT. In 2015, the Collectivité of St. Barthélemy (St. Barth’s) acquired a suite of 10 animal sculptures for public display throughout the island. Skaarup’s sculptures have also been exhibited at the Koldinghus Museum, Denmark; and in Italy at Museo del Cenacolo di Ognissanti, Florence; the Four Seasons Hotel, Florence; and Hotel Cipriani, Venice. Bjørn Okholm Skaarup lives and works in New York City. He is a member of the Royal British Society of Sculptors.