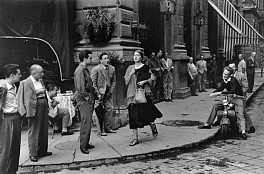 Ruth Orkin was an award-winning photojournalist and filmmaker. At the age of 10, she received her first camera, a 39 cent Univex. She began by photographing her friends and teachers at school. At 17 years old she took a monumental bicycle trip across the United States from Los Angeles to New York City to see the 1939 World’s Fair, and she photographed along the way.

Orkin moved to New York in 1943, where she worked as a nightclub photographer and shot baby pictures by day to buy her first professional camera. She worked for all the major magazines in 1940s, and also went to Tanglewood during the summers to shoot rehearsals.

In 1951, LIFE magazine sent her to Israel with Israeli Philharmonic. Orkin then went to Italy, and it was in Florence where she met Nina Lee Craig, an art student and fellow American, who became the subject of “American Girl in Italy.” The photograph was part of a series originally titled “Don’t Be Afraid to Travel Alone” about what they encountered as women traveling alone in Europe after the war.

SELECTED PUBLIATIONS:
Jun, 1995, The Toronto Stat; “Out of the Picture: Bringing the Art of Ruth Orkin Back to Focus,” by Susan Walker
Apr, 1995, The New York Times, “Candid or Contrived? The Making of a Classic,” by Shaun Considine
Jun, 1995, The New York Times, “Beyond that Single, Famous Picture,” by Charles Hagen
Jun, 1977, Popular Photography, “Ruth Orkin: Gravure Portfolio,” by Nancy Stevens
Jan, 1998, Milwaukee journal Sentinel, “A Gift for Knowing Just When to Click,” by James Auer
Mar, 1999, Los Angeles Times, “The Unexpected in the Everyday,” by David Pagel
Sep, 1982, Harper’s Bazaar, “Over 40 in the Arts,” by Sheila Feldman
Dec, 1979, Chicago Sun- Times, “Orkin -This Woman Has Eyes,” by David Elliot
May, 1975, Camera 35, “Frontier Woman,” by Sarah Webb Barrell

BOOKS:
1995, Ruth Orkin: A Retrospective, The Estate of Ruth Orkin
1983, More Pictures From My Window, Rizzoli
1981, A Photo journal, A Studio Book, The Viking Press
1978, A World Through My Window, Harper and Row