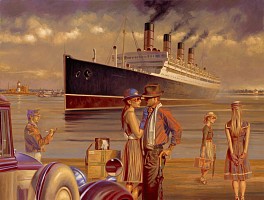 Born in London in 1973, Peregrine Heathcote graduated from the Florence Academy of Art in 1995 and currently lives and works in Chelsea, London.

Peregrine Heathcote’s paintings conjure a world of intoxicating glamour and intrigue, slipping across the boundaries of time to fuse iconic pre-war design with modern conceptions of beauty and silverscreen-era romance.

The images could depict a dream world—the pure artistic vision of a painter fascinated with the bygone glamour of his parents’ youth and his own childhood spent in Britain and Dubai, but also by the contemporary incarnation of glamour in an international jet-set culture.

The images could be literal representations of actors on movie sets, or real-life models letting their contemporary sensibilities peek through as they pose against period backdrops.

Each canvas suggests a story, prompting us to imagine the circumstances around a single crucial scene. Heathcote purposefully leaves such questions open, allowing us room to construct multiple narratives. This weaving in and out of various realities, blending the real and unreal is achieved with great skill, imagination, and ingenuity.

The BBC have recently filmed a documentary on Peregrine’s portrait painting which has been aired worldwide.

His paintings, including commissioned portraits of prominent executives, aristocrats, and socialites, have been exhibited at the Royal Society of Portrait Painters, the Royal Academy, and are collected and exhibited all over the world.