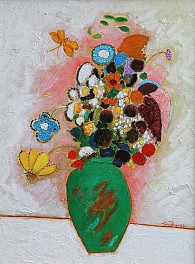 Born in Paris in 1944, to a family of antique dealers and sculptors, Louis started out as a wood sculptor in his family trade. His display of talent led to commissions to restore fine Boulle furniture and later the opportunity to restore paintings by masters such as Perugino and Tintoretto. In 1967 Louis painted and sculpted in Central Italy, where he also worked on restoring works by Perugino and Tintoretto. He did extensive fresco work in several chapels in Italy and Switzerland.

Louis was later accepted to the prestigious École Nationale Supérieure des Beaux Arts. While in Paris, he met surrealist innovator Salvador Dalí and was moved by his ingenious ability to transmit his wild imagination into paintings. Although influenced by Dalí, an early friendship with William Congdon, a member of New York’s “Action Painting” school of the 1940s (of which Jackson Pollack was also a member) was Louis’ principal inspiration. This was a break from abstract expressionism to the process itself of painting freely. Jaquet was later recognized in important Italian art catalogues for his “Homage to Jackson Pollock”.

In 1972, Louis graduated from the École Nationale Supérieure des Beaux Arts which marked the beginning of his world traveling and painting. Louis feels, for himself, travels are a necessity. Traveling feeds his creativity and provides answers to his inner questions.

The seventies saw him through the Middle East, Afghanistan, Turkey, and India. The richness of the experiences acquired in these countries and Israel gave him a deep faith in human resilience and the essential beauty of humanity. In India he learned to create his own oil paint by mixing in organic pigments and natural elements, adding life to his subjects.  His paintings are tapestries of color ranging from the soft luminescence of dream-like pastels to richly layered jewel tones embedded with quartz and gold. The myriad of experience and creative focus lends innocence to Louis’ painting that comes only from mature introspection.

Louis Jaquet continues to travel extensively. He maintains a studio in Italy (where he has exhibited regularly since the 70’s). He also maintains studios in Southern France and Paris. He is listed in the prestigious Benezit, the encyclopedic directory of artists.

ARTIST’S STATEMENT:
“Memory becomes a gesture in painting. The more I search for values, the more difficult it is to execute it. Painting for me is an ethic movement which blossoms through the language of signs; a key that gives things their ethic. Beauty is found there.”
-Louis Jaquet