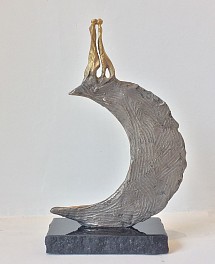 Jane DeDecker’s energetic and dynamic bronze sculptures serve as a reflection of her own life experiences and those of her closely-knit family. Her twelve nieces and nephews are the primary source of her inspiration, though DeDecker’s sculptures are not portraits.  In fact, her loose style leaves her viewers with room for interpretation, so as to see their own lives within her sculptures. This imprecision, combined with her unique ability to capture specific moments to which each viewer can relate on a personal level, regardless of age, give DeDecker’s work a timeless quality that spans generations.

DeDecker began her artistic training as a painter at the University of Northern Colorado, until a professor, noticing her joy in the portrayal of shapes and forms, suggested she try her hand at sculpture.  Taking his advice, DeDecker went on to study at Gobelins School of Tapestry in Paris, and in returning to Colorado, spent five years as master craftsman to the notable bronze sculptor George Lundeen.

DeDecker is a member of the National Sculpture Society and has gone on to receive copious awards, such as the Critics Choice Award from the Kimball Art Museum, Fort Worth, TX. Major installations of DeDecker’s sculptures are located at the Presidential Library in Washington, DC; the Mayo Clinic, Rochester, Minnesota; Benson Park, Loveland, Colorado; American Stores, Salt Lake City, Utah; Trammell Crow, St. Louis, Missouri and Clinton Library, Little Rock, Arkansas, among many others.

APPRENTICESHIPS:
1983-89, Lundeen Studios, Loveland, Colorado; George Lundeen, sculptor.
“The city of Loveland is a community filled with figurative sculptors. I apprenticed with George Lundeen for five years, learning all the techniques of both clay and wax, the lost wax technique of bronze casting, molding, chasing and finishing the bronze material, patina and finish work. Within two years I was promoted to the position of master craftsman, whereupon I trained new apprentices and oversaw the production of nearly fifty life-size bronzes and two monuments. During my employment with Lundeen Studios, I assisted the following sculptors: Fritz White, Danny Ostermiller and Kent Ulberg.”
1988-89, Battle Mountain Bronze, Minturn, CO.
With Robert Zimmerman, foundry owner, “I assisted in the training of new apprentices and assisted in the production of monuments by Terry Kelsey, Forrest Hart and Glenna Goodacre.”